On Nov. 9, 2016, many progressives curled up into the fetal position, mourning the election of Donald J. Trump. Uyen Nguyen understood their despair — but she refused to succumb.

Instead, she took to Facebook and hatched a plan.

“I’m thinking of starting a November Ninth Fund, where the money will go to help get more girls and minorities into politics,” she wrote. “Who’s with me? This sadness I feel for our country needs to be converted into doing something useful.”

One year later, Nguyen had helped recruit a team of ambitious women determined to change the face of American politics, starting at the grassroots level. They banded together, raised money and hired an experienced political operative to head up a new chapter of Emerge America, a national organization that teaches progressive women the nuts and bolts of running for office.

Nguyen and her “progressive sisters,” as they sometimes refer to one another, founded the 18th state chapter of Emerge America, which has blossomed to 25 chapters since Trump was elected. As their efforts here in Washington state began, they had no idea they were part of a national wave that would generate an enormous surge of female candidates across the country, most of them mortified that a self-professed “pussy grabber” had been elected to the nation’s highest office.

Since Trump won, 36,000 women have contacted Emily’s List, a national organization that supports female candidates, for advice about running for office. In the entire 2016 election cycle, only 920 women reached out for support.

Emerge, meanwhile, has seen its overall enrollment surge by 87 percent. More than 450 of its alumnae are running for office in 2018, up from 300 in the last election cycle.

“After Hillary lost, women woke up the next day and said, ‘Well, OK, if not Hillary to fight back, then who? Then me. It has to be me,’” said A’shanti Gholar, the organization’s national political director.

In advance of this year’s inaugural class, Emerge Washington held two three-day boot camps last summer, when 40 women turned out for training sessions in Spokane and Seattle. One graduate of an Emerge boot camp, Kim Schrier, is considered a strong contender for the Democratic nomination in an important Washington swing district that could help tip the balance of power in the U.S. Congress. Schrier was one of the 50 female candidates recently featured on the cover of Time magazine.

Forty women applied for Emerge Washington’s 2018 class, and 24 were selected. Most intend to run for office within the next two to five years.

Straight, gay and bisexual, black, white and brown, the recruits have a few fundamentals in common: contempt for Donald Trump, and a shared vision of a progressive America. 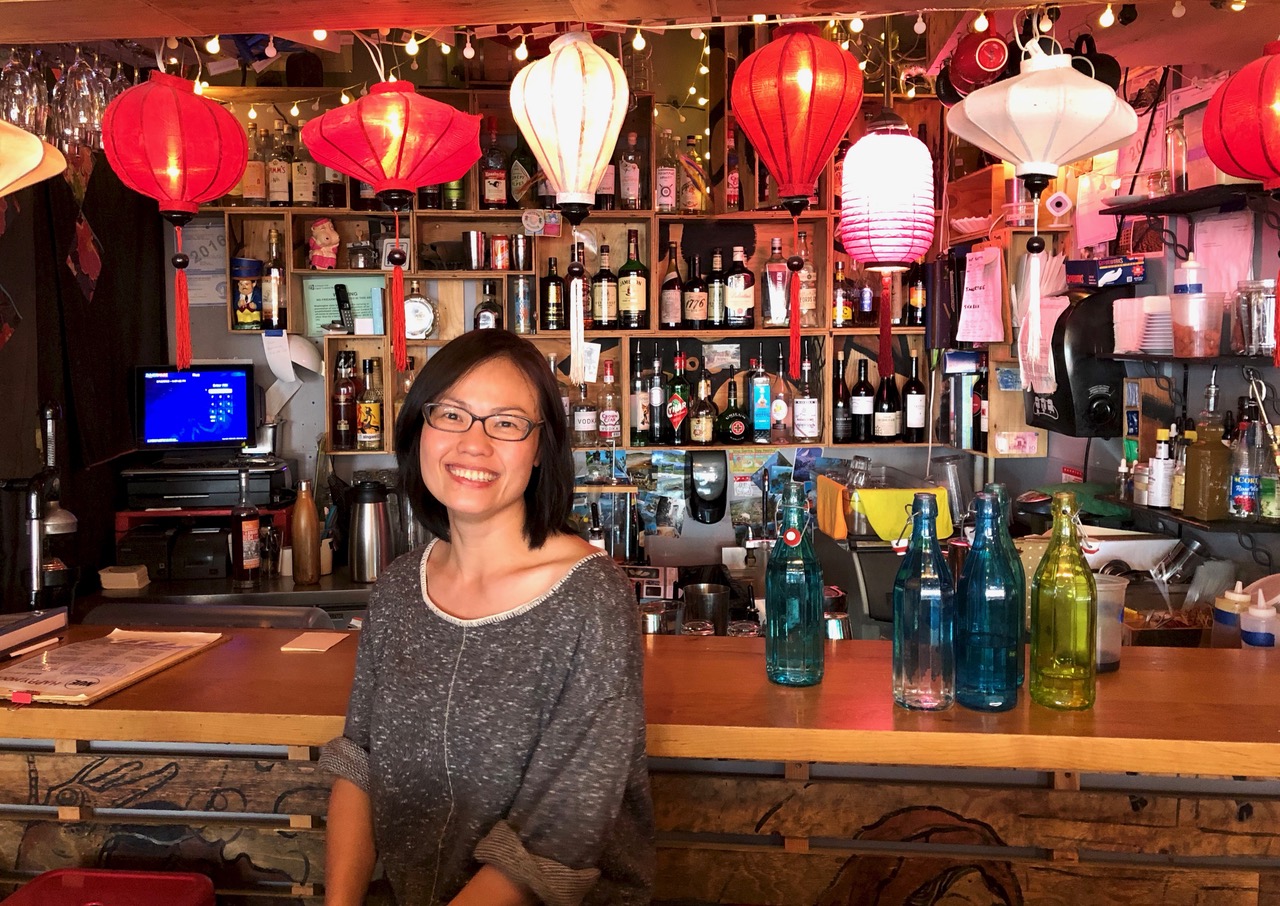 Uyen Nguyen sits at the bar at Nue, the restaurant she and her husband own on Capitol Hill. (Photo by Ben Stocking for Crosscut)

That was just the sort of diversity Nguyen was hoping for when she fired off her Nov. 9 Facebook missive. That very afternoon, she huddled with a friend who had responded to her post. They met at Nue, the international restaurant she and her husband own in Capitol Hill, where they serve their favorite street food dishes from around the world.

A Vietnamese refugee, Nguyen had kept her distance from politics most of her life, associating it with war and death. Her father, who fought for the defeated South Vietnamese army, was sent to a communist reeducation camp after the war. Her grandfather died in one.

In 1975, while her father was imprisoned, Nguyen and several family members fled Vietnam in a rickety, overcrowded boat. Her mother, a brother and a sister didn’t survive the trip. Nguyen, 10 years old at the time, was raised by an aunt and uncle in California.

Now 43, she has spent most of her adult life restricting her civic engagement to casting a ballot. With his remarks about women, immigrants and refugees, Trump helped propel Nguyen into the political arena. She travelled to California, Colorado and Nevada to campaign for Hillary Clinton, knocking on doors and making phone calls.

“She was just so qualified,” Nguyen said. “We had a woman with probably the most experience of any candidate of modern times, and what we’re talking about is how loud she was or how she’s not smiling enough. Why does that matter?”

In the days after the election, Nguyen immediately started researching ways to fight back. She soon discovered Emerge America and contacted the national office, which put her in touch with other Washington women who were hoping to band together for the same purpose. They networked.

Less than a month after Trump’s election, on Nov. 29, about 40 of them gathered at an old brick building in Pioneer Square. There they agreed to form a new chapter of Emerge.

Most of them were political newcomers. The only experienced hand in the group was Pamela Eakes, a prominent Democratic fundraiser and activist who is close to Al Gore and both Clintons. Still mourning, Eakes attended the meeting dressed in black and cried at every stop light on her way there.

“The room was full of energy, with all these new people coming to the forefront of political and civic action,” Eakes said. “This was a can-do group.”

Challenged by the national office, they committed to raising $25,000 toward hiring an executive director. Within another month, they had the money — before their self-imposed deadline of Trump’s inauguration.

Through word of mouth and social media, they recruited their first class.

“If you’re pissed off enough and want to run for public office, contact me,” Nguyen wrote in a Facebook post last May, after Republicans attempted to repeal Obamacare. “It’s one of the best forms of revenge! If you hate the policies that get thrown at you, then change the policymakers!”

In June, Karen Besserman came aboard as Emerge Washington’s executive director. An experienced Seattle-based political consultant, she had worked on a statewide campaign for gun safety, Maria Cantwell’s successful U.S. senate campaign and a wide array of other state races. But after several years in the political arena, Besserman had burned out. In 2004, she shifted her business to supporting nonprofit organizations.

Trump’s victory prompted her to rejoin the political fray.

“Things like Emerge are going to save the day,” she said. “These women want to change the world, and they’re going to do it.”

The women who are running

The inaugural Emerge group dubbed themselves the Patty Murray Class, after Washington’s senior senator. During five weekend sessions, they mingled with political pros, shadowed legislators in Olympia and learned how to craft a campaign message. They practiced the most dreaded of political tasks – fundraising – and learned the ins and outs of social media and debate preparation.

Most importantly, they formed a network of like-minded women to support them through the rough and tumble of a campaign.

The class finished its last weekend retreat just in time for graduates to meet the May 18 filing deadline. Eight graduates plan to run for office this year — one for U.S. Congress, one for county commission and six for the state legislature.

Some members of the inaugural class have engaged in politics for a long time as local officials or precinct captains. Some are neophytes. They hail from urban and rural districts, and range in age from 29 to 68. Some are stay-at-home moms, some are professionals. Some are affluent, some are working class. Ten are women of color or LGBTQ.

All are passionate about their mission.

Before joining Emerge, Jami Smith, 39, staged an unsuccessful run for city council in the Seattle suburb of Renton. A computer scientist and businesswoman, she plans to run again next year.

“I’m Black, bisexual and Buddhist,” said Smith, who works at tech billionaire Paul Allen’s Seattle scientific research institute. “A lot of my circle is very diverse. After the election, I just felt so concerned about my LGBTQ friends, my Black friends and family. It was time for me to stop depending on other people, like Hillary, to pull my weight.”

She threw her hat in the ring.

Though Whites have dominated the local city council for years, Renton is changing rapidly, with many people of color moving in as gentrification drives Seattle housing prices through the roof. Even a Black bisexual Buddhist stands a chance of winning — especially one who has served as vice-chair of the city planning commission and a member of Renton’s Inclusion Commission.

So she turned to Emerge for a crash course in campaigning.

Ami Nguyen — no relation to Uyen — is among those who joined the Emerge class without any previous political experience. She graduated from Stanford University and UCLA law school and works in the Seattle public defender’s office representing clients dealing with mental health issues. At 32, she aspires to represent her South Seattle neighborhood on the city council and is contemplating a campaign, perhaps in 2023.

She, too, is the daughter of Vietnamese refugees. Her parents eked out a living as fishermen in Vietnam and did a series of odd jobs to support their four children after arriving in the United States.

“I want to use my personal and professional experience on behalf of communities that don’t have a voice,” she said.

Perhaps Emerge Washington’s most high-profile candidate is Kim Schrier, a pediatrician who is running to represent the 8th Congressional District, which sprawls from suburban Seattle eastward across the Cascade mountain range. In 2016, Hillary Clinton edged Trump in the purple district by 3 points. It is currently represented by Republican Dave Reichert, a former sheriff who is serving his seventh and final term.

Before throwing her hat in the ring, Schrier had spent 17 years serving patients in Issaquah, a Seattle exurb in the foothills of the Cascades. Diagnosed with diabetes as a teenager, she was especially concerned about Trump’s determination to repeal Obamacare.

“I never, ever thought of myself in politics, but the 2016 election was a big wake-up call for me,” Schrier said. “The biggest message was that an unchecked Donald Trump is a very dangerous thing.”

“We had conversations about all the nitty gritty of running a campaign — how to Rolodex, how to ask for money, how to doorbell and canvas, how to handle adversarial questions, what can a campaign manager do for you?”

Until that point, Schrier, 49, had been plotting campaign strategy around the kitchen table with her friend Tracy Dobmeier, who grew up two doors down the street from her in Los Angeles and now lives in Issaquah. They’ve been pals since age two.

“We quickly realized that this was bigger than two best friends could handle,” said Schrier, who supports single-payer health care, urgent action on climate change, and tougher gun control measures.

Last August she hired Michael Beckendorf, a professional campaign manager. Now she’s leading the race for money and endorsements in a crowded Democratic field that is seeking to face off against Republican Dino Rossi.

And, of course, she continues to consult with women she met through Emerge.

“The bonding and the sisterhood that our groups form is actually more than half of what we do,” said Besserman, the Washington director. “They’ll support each other for life.”

Word of Emerge is quickly rippling through Washington’s progressive political circles. Turnout was strong on a recent recruiting trip, with more than 125 people turning out to learn about the group.

“Women came out in droves to meet us,” Besserman said. “They are fired up. They want to run, and they want to win.”